Recent updates:
You are at:Home»UK News»HSS (UK) invited by Leader of the House of Commons to Participate in a Podcast ‘Why Parliament Works’ 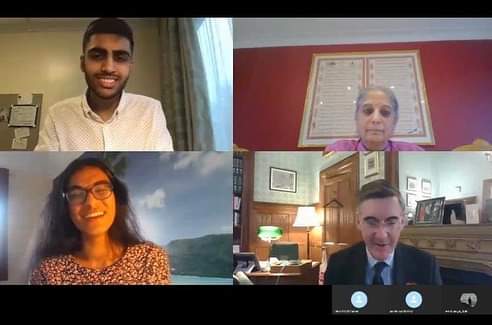 Highly, impressed by HSS (UK)’s UK Parliament Week engagement and activities where 49 shakhas (regional activity centres) registered to engage in UK Parliament Week in 2020,  the Leader of the House Commons Jacob Rees Mogg invited HSS (UK) to participate in a Podcast. At the dispatch box, the leader of the House of Commons comes across as an imposing figure, but this podcast brought a more lighthearted tone. In the backdrop of his offices at Westminster, we had good-humoured yet productive conversation highlighting the need for greater involvement in Parliament by the Hindu community.
A series of Government Podcasts exploring Parliament’s place at the heart of UK’s constitution was launched to bring people closer to the UK Parliament.

In episodes of ‘Why Parliament Works’, hosted by Jacob Rees-Mogg, we were invited to explore topics which included a discussion on how  Parliament can deliver for the Hindu community where both members of Parliament and the Hindu Community working together can bring about a better understanding of the workings of Parliament and democracy and reach out for wider engagement.
The podcast started with the following statement by the Hon Jacob Rees-Mogg, ‘ One of the most active partner organisations is Hindu Swayamsevak Sangh, a charity which places great emphasis on preserving, practicing and promoting Hindu values and responsible citizenship. It has over 100 activity centres across the UK and has been keen to involve and inspire Hindus to understand the relevance of democratic process and UK politics.’

In talking about the work of HSS (UK), we were able to emphasise the values of Vasudhaiva Kutumbakam (the whole world is one family) and our core values of Sewa (Selfless Service), Sanskaar (Good Citizenship) and Sangathan (Community Spirit). Later, our young members (swayamsevaks and sevikas) had the opportunity to ask Jacob questions which included the right age to go into politics, the worry about the voice of Hindus not being heard by the politicians, reform of the House of Lords, secularism in Britain, amongst others.

Pre-recorded excerpts of HSS (UK) youth speaking about how Parliament Week had changed their perception of Parliament were included in the Podcast. A 14-Year-old participant said, ‘ After Parliament Week I feel empowered and confident that together we can make a difference’.

This was an experience we all valued and we are keen to percolate our message of active participation in Parliament and democracy to the wider Hindu community.

The full recording of the podcast can be listened to on the following link: https://anchor.fm/commonsleader3/episodes/Jacob-Rees-Mogg-meets-Hindu-Swayamsevak-Sangh-UK-emij7i 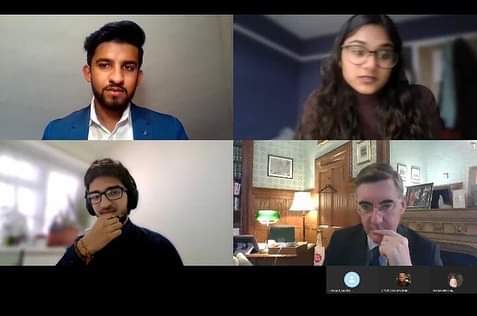