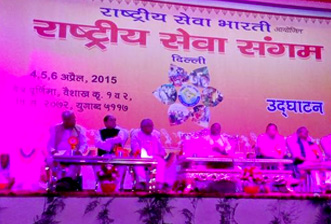 The Second Rashtriya Sewa Sangam organised in Delhi from April 4 to 6 brought together more than 3,000 delegates representing over 700 sewa organizations engaged in various types of sewa activities in all states and the bigwigs of corporate sector. True to the theme of the Sangam ‘Samaras Bharat, Samridha Bharat’, this Collective Social Responsibility gives a new meaning to the concept of CSR.

It concluded on April 6 with a pledge to meet in 2020 with double the sewa projects and double the number of organisations associated with the Rashtriya Sewa Bharati. RSS Sarsanghachalak Shri Mohan Bhagwat specifically called upon the workers to leave no areas untouch with sewa activity and associate more people with the projects.

Organized at specially created Samarasata Nagar combining three resorts together, the Sewa Sangam 2015 was a historic event in many senses. It was for the first time that more than 3,000 delegates representing over 700 sewa organizations from all over the country assembled at one place and shared their experiences with each other. They also discussed and formulated action plan for further expansion of the work. The presence of Mata Amritanandamayi Devi at the inaugural session and the Wipro Chairman Shri Azim Premji as well as GMR Group MD Shri GM Rao on second day along with hundreds of other leading philanthropists of Delhi and surrounding areas proved motivating for the delegates.

On March 3, an exhibition was inaugurated by Swami Rajrajeshwarasharam and leading film director Shri Subhash Ghai. Inaugurating the Sewa Sangam on 4th April, Mata Amritanandamayi Devi called upon the retired fathers and mothers to spend at least two years in villages in order to conduct classes that foster values in children there.

Addressing the Sewa Sangam on April 5, Sarsanghachalak Shri Mohan Bhagwat said every deprived person should get the benefit of the sewa and there should be no discrimination among the beneficiaries on the basis of way of worship, region, language or community. “Sewa has to be done without expecting anything in exchange. Also there should be no ego in sewa. Nobody should have the feeling that we are helping
anybody” he said.

In his speech, Premji said that he was attending the event on the invitation of Bhagwat over which some people had expressed apprehension that it would appear as endorsing the ideology of the Sangh. He said that he did not follow that advice as he is not a political person and felt that by merely speaking one cannot be seen as endorsing an ideology in totality.

Shri GM Rao, founder chairman of GMR Group, said just like the entrepreneurs and businessmen are economic engine for the country, the voluntary organisations and philanthropists too are social engine for the country. They both are equally required for development and growth of the country, society and the people. Earlier on April 4, RSS Sarkaryavah Shri Bhaiyaji Joshi said the prime objective of sewa is to generate the feeling of self-respect among those being served. RSS Sahsarkaryavah Dr Krishna Gopal said the then Sarsanghachalak Shri Balasaheb Deoras in 1989 had set a target of 5,000 sewa projects before the workers. They achieved that target before 1995. And today we have over 1.5 lakh sewa projects across the country.

Speaking at the concluding session on April 6, RSS Sahsarkaryavah Shri Dattatreya Hosabale said the Sewa Sangam is not merely an event it is part of a greater movement, as we want to make sewa as ‘mantra’ of life for everyone. He said sewa is a medium to repay the social debt..