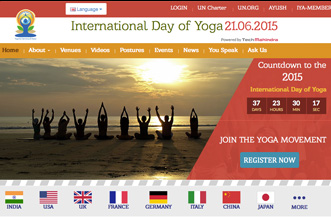 Prime Minister Narendra Modi launched a portal for the International Day of Yoga on 10th April at Paris, describing the ancient Bharatiya spiritual practice as capable of awakening a sense of oneness. Flanked by UNESCO Director General Irena Bukova, Modi officially launched the www.Idayofyoga.org website after addressing a gathering at the UNESCO headquarters that included a large number of NRIs.

The website, developed by IT services major Tech Mahindra as part of its Corporate Social Responsibility initiative to “honour Modi’s vision of Yoga as a globally uniting force”, intends to be a one-stop solution for all information related to the International Day of Yoga, 2015.