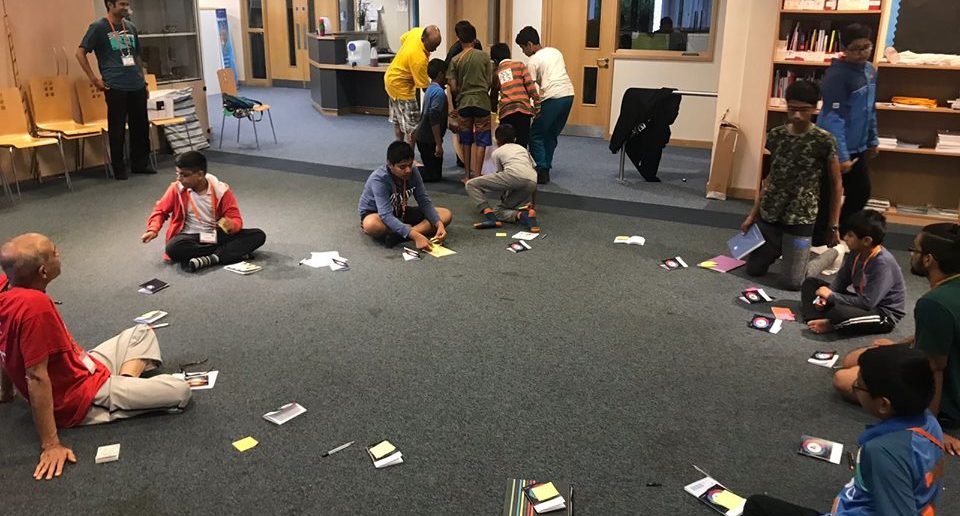 On the weekend of 9th and 10th June 2018, 79 mahila and purush karyakartas left their homes and families and dedicated their weekend out of busy lives to the Balagokulam Karyakata Varg (BGKV) 2018 at the picturesque and idyllic countryside park of Beaumanor Hall in Leicestershire.

A Mata here has left her very young twins at home, a Pita left an 11 weeks baby at home to attend the varg. They came from the far corners of England, Scotland and Ireland to. Few people woke up early in the morning like 4am to start the journey and reach on time to the Varg.

There were 84 confirmed registrations with fees payment however 5 karyakartas could not attend due to unavoidable reasons. Out of 79 attendees, 11 were the Varg adhikarigan and 68 Shiksharthi. Sankhya-wise leading Vibhag were: West London (13); East London & Essex (12); West England & Wales (11) and North East & Scotland (11). Sankhya-wise leading Nagars were: Swindon (9); Redbridge (9); Liverpool (6) and Newcastle Upon Tyne (5).

The drive in all was the same –enlighten the Bhavana (भावना), the spirit, and attain Kaushal (कौशल) – skills and become a better Karyakarta who can contribute better to the to the local Balagokulam and Parivaar shakha. It was a good mix of Karyakartas, ranging from those who have been running the Balagokulam or shakha from over 10 years to those who are keen to start a Balagokulam in their areas.

Ashishji Channawar, the Varg Karyawaha welcomed all the Karyakartas and introduced the adhikarigan for the varg. The Varg was inaugurated with traditional way with Deep Prajjwalan, which was done by Shri Satyenji from Belfast who travelled from furthest point. In Udghatan Bauddhik, adarniya Chandrakantji set the very positive context by highlighting “Why this Karyakarta Varg instead of the annual Bakagokluam shibir?” and inspired all the attendees to make the most of this opportunity. He described the diseases afflicting the Hindu samaj and how it can be overcome. A well trained, motivated Karyakarta is needed not just to teach geet and shloka to the children, but to light a lamp of hope and show the path to the larger Hindu samaj in the locality.

With the awesome feast of Idli Sambar during bhojan, Karyakartas also got the chance to mingle with each other.

Ashishji conducted a charcha on “Objectives of Baudhik, and various channels of delivery and effective planning”. The ganas did an exercise of coming up with a model Bauddhik yojana for the year covering a full range of Baudhik types and including balanced mix of vishayas – Utsavs, Mahapurush, Sangh and Hindutva. This gave the confidence to the Shiksharthi that annual Bauddhik Planning is not very complex or time-consuming task considering the available resources & guidance and the hands-on experience they gained through the exercise.

Later in the afternoon, the Gana went out to learn the Aachaar Paddhati and Shikshan Vidhi and learnt a number of exciting and energetic outdoor Khel.

After the Ratri Bhojan, Ramji shared the effective art of storytelling – of capturing the attention of audience, having the climax and a meaningful conclusion.  कथा तू बोध रम्या – kathaa tu bodh ramaya (Every story is an opportunity to bring the positive change in the audience).

With the hectic day of learning over, it was time to relax and enjoy the ratri karyakram with lots of light hearted bantering during the Antakshari and Sangeet Khurchi.

The next day started with the morning Shakha and Yogasana. Karyakartas learnt warm up techniques, Aasana and a number of new khel. The Aachar paddhati was again reinforced, giving Karyakartas an opportunity to practise the same.

Later in the morning Chandrakantji discussed the characteristics of an ideal Karyakarta. As Shri Krishna explains in Bhagwad Geeta – “someone who is in the Satvik mode of goodness, when he or she is free from egotism and attachment, endowed with enthusiasm and determination, and equipoised in success and failure.”. The gathered Karyakartas also learnt about the important aspects of Karya paddhati – a unique way of working that Sangh has developed over 90 years, a path to follow in order to become a better Karyakarta.

The ganas then came together to learn arts and craft activities, another very important way of engaging the young kids. They learnt how to engage kids in making colourful posters on a relevant themes and use recycling material to make objects relevant for the Utsav and Tyohaar. Some of the artefacts prepared by the Gana were really amazing on creativity and ingenuity.

After Bhojan, Harshji, Mukeshji and Falguniben took us through Balagokulam A to Z – a complete guide to all aspects of starting and running a Balagokulam and answered some of the common queries from Karyakartas.

As the last session, Ramji summarised what the Karyakartas have all learnt from this varg – the importance of assimilating – Shraddha (श्रद्धा), Nishtha (निष्ठा), Satatata (सततता), Mamata (ममता), Bhavana (भावना) , Saadhana (साधना), Tapasya (तपस्या)   making it all part of the Swabhav (स्वाभाव).

Prabandhak and in particular Bhojanalay team won the hearts. Although it was not a shibir, the Bhojanalaya team outshined any other national karyakram with fantastic and varied menu from Idli Sambar, Mutter Paneer, Pav Bhaji and Ice-cream during the Varg.

The Karyakartas then left the varg with the feeling of स्वयं पुष्पं स्वयं घृष्टञ्चचन्दनम् । I wish to become a flower. And I wish to offer myself in the service of Dharti Maa !