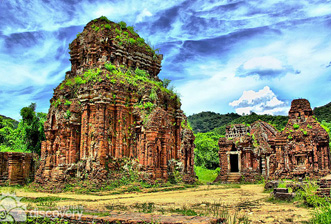 Not far from Hoi An, is My Son, a UNESCO World Heritage site, once the location of the ancient Hindu
Champa civilisation and its majestic complex of temples dedicated to Lord Shiva and Lord Vishnu. Originally the religious and political capital of the Champa kingdom, the complex was built around
the third or fourth century AD, and traces its spiritual roots back to Hinduism. The city was forgotten with the passing of the Cham reign and for centuries sat hidden in the jungle. Consisting of 70 ruins over 57ha, the site was rediscovered and renovated by the French in the late 1890s, but was subsequently heavily bombed during the Vietnam War, when it was found to be a hiding place for the Viet Cong. Parts of the site
are gradually being reconstructed using the traditional red bricks of the original work, although some of the very early work looks clumsy. My Son is an extraordinary example of an ancient culture – and one which kept written records. The My Son site is easily accessible from Hoi An or Da Nang, on Vietnam’s south central coast, via group or private tours.