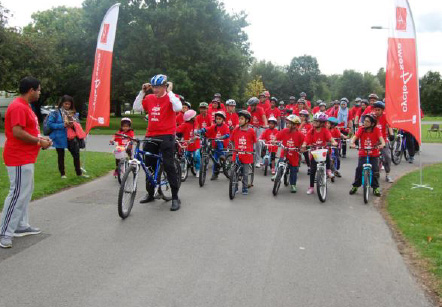 With Cycle4Sewa making its 4th Annual appearance, it’s definitely an event that’s catching on. From last
year such with Manchester adding to the list of venues, this year saw the addition of third venue
Birmingham.

A total of 540 people attended at the 3 venues, most with cycles and headgear, raring to enjoy the event.
Newham venue was attended by Rt.Hon. Wes Streeting MP for Ilford North and Dep. Lord Mayor of
Redbridge. The Manchester venue was flagged of by Police Chief Commissioner of Tameside.
At the Birmingham venue, Rt.Hon.Julian Knight MP for Solihull, flagged off and took part in the event.
This is a great event to get people of all ages involved in getting and staying fit. If any nagar wants to be a
part of Cycle4Sewa for 2016, contact Shri Harish Budhia at hari_bhudia@yahoo.co.uk